So I obviously did not keep up with the monthly peer to peer lending entries. Life, work, lack or interest, etc.  But I never stopped the investments. Well, that's not entirely true, I decided to wind down my Prosper account and stick with Lending Club as my primary source. Primarily just because I seem to understand LC better.

So where do things stand these days? Let's review! 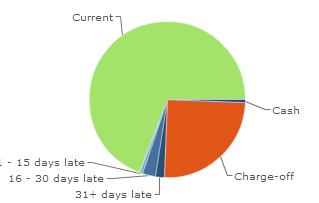 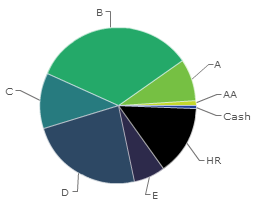 Please note that the status chart above looks worse than it actually is since I've been withdrawing all payments from the platform rather than reinvesting. If you kept the charge off in proportion it should be ~1/2 the size it appears.

Yes, you read that correctly, 37 charged off notes. Generally speaking Prosper's default rate tends to trend higher than LC's. This isn't terribly surprising since Prosper accepts higher risk (and higher interest) loans. (For comparison of default rates, check out Nickel Steamroller's chart.) But even then this rate is more than twice as high as my LC account, so I should, perhaps, chalk this up to less sound portfolio filtering and strategy on my part.

That said, my return is ~5.65% and I've still made a vastly greater return than if I'd left this sitting in my ING (Well... now it's Capital One 360 -- really? Man that's a... name.) account. I'm fully aware that I tried Propser first and that it was a learning experience. If I'd try LC first this whole write up may have looked very different and maybe I'd be winding down LC instead. Even so, I plan on continuing to wind down the Prosper account and focusing solely on LC.

LC has been very good to me these last many months. 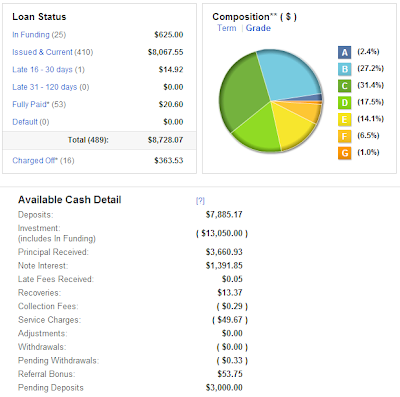 My return is ~11.35% as of writing this. I've had 16 notes charged off total. I've also taken common P2P investing advice and begun selling late notes on FolioFN for appropriate discounts to par. Selling late notes is critical, it has already improved my return by 1%, and considering that's often better than the entire yield of a 'high-interest' savings account these days, that's nothing to sneeze at.

A number of websites have come and gone for analyzing the P2P loan base. Lend Stats is perhaps one of the most well known that comes to mind. The fact that both Prosper and Lending Club transparently offer information on their entire loan base means that anyone can try their hands at data analysis. The new space that's popping up, however, are "premium" (read: paid) analysis shops. There's Interest Radar and Nickel Steamroller Premium. I've been using IR for the last month or so. The site leaves much to be desired in terms of eye candy and web 2.0 functionality, but I do like the solid filtering and in-house scoring systems.  I have not used NSP yet, but I plan on it. From the descriptions they put forward it seems that the scope of what they're trying to achieve probably exceeds that of IR and will do so at a lower price point.

By the above I mean that NSP sounds like they are going to aim for fully automated investing, active management (perhaps automatically selling notes? that'd be nice), etc. IR is more about giving you the analysis tools that LC refuses to. Such as very specific filters (sometimes you don't want 20-25, sometimes you want 23.5, try telling LC that) and custom filtering options.

I'm coming up on two years in the peer to peer space, I'll hit that mile stone come December. At this point, I'm thoroughly sold. I plan on funneling my small savings account into LC and getting fully invested. (I should note that this is not my primary savings account, I do have a well-rounded emergency fund, and I'm not committing fiscal lunacy.) The risk to reward factor here is too compelling to ignore. Yes, the default rates could get considerably worse should we hit another economic downturn (just look at the default rates for LC during the 2007-2008 period) and so, in that respect, it is not at all comparable to a classic idea of savings. But I am young and can afford to take on more risk, and this is not my only venue of investment. My stock returns often beat my P2P returns, but I think from a risk and diversification perspective P2P lending has a solid place in anyone's portfolio.
Posted by Unknown at 7:32 AM No comments: