Following up on Beta 1 I've now finished Beta 2 of AnyBackup! What's different? Well, I ported the entire project to Python instead of Perl. Not because I think that there's any great functional benefit to one over the other, but rather because it's something I needed to pick up for work anyway. The main benefit to this release is that pretty much all the standing issues have been resolved. See below. I'll be looking into setting up a google code page in the near future for AnyBackup since it seems like a much cleaner approach than just updating my blog + mediafire account all the time.

Note: I work on this program in my spare time primarily to solve my own backup needs, I release it for others to use since I figure others may have similar backup needs that AnyBackup can fulfill. That said, this is beta software (and even if it weren't) I can make no guarantees that it will always 100% back up all your data and that no data loss will occur. There can be bugs that I don't know about / haven't hit. So basically, buyer beware, use at your own risk, I can't be held responsible for any issues that arise. If you do hit issues, don't hesitate to report them!

I'm only going to add one new screen shot to show off the (very small) UI changes to the main window. Despite the complete port of the app to Python, it's still using wxWidgets which is pretty much identical across languages. 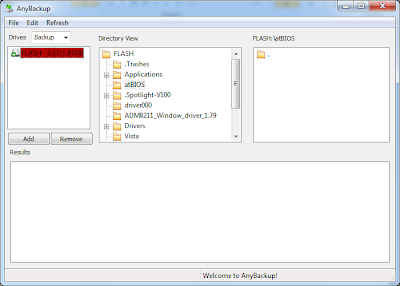 Download:
(As before, this code is released under the GPL license!)
Update: Google Code project created! You can find it here.